I was most fortunate to have a chance to pay my respects to the noble Wang Zha Shang Zun and receive a most wonderful teaching from him. Because of his great compassion and mercy in giving me his wisdom concerning an important dharma matter, I now have a deeper understanding and appreciation for the dharma that I practice and my cultivation. I would like to share this truth with others. I have already distributed the attached article that I wrote about this event to the readers of the Holy Vajrasana Temple’s Newsletter and to my students whom I could reach by email or WeChat.  I would like to request that IBSA further distribute the attached to their extensive mailing list so that even more people can share the good news and benefit and let more people know the greatness and inconceivable virtue of Wang Zha Shang Zun. Of course, I am not capable of using words to express the supremacy of H.H. Dorje Chang Buddha III, who is both Wang Zha Shang Zun’s and my master.

The most holy Wang Zha Shang Zun is truly great. His profound wisdom, humility, and kindness serve as an example for us all!  Amitabha!

Many blessings to all for the coming New Year, Zhaxi Zhuoma.

This February Newsletter of the Holy Vajrasana Temple & Retreat Center is devoted entirely to Abbot Zhaxi Zhuoma Rinpoche’s personal opportunity to pay respect to Wang Zha Shang Zun after she participated in the Jin Gang Fa Man Ze Jue Dharma Assembly and the precious dharma that she received as a result of that meeting. Because of its importance to both Chinese and English-speaking disciples, this Newsletter will be provided in both English and Chinese.

To my disciples and other friends of the Xuanfa Institute:

Since the United International World Buddhism Association Headquarters (UIWBAH) article recently appeared concerning the September Jin Gang Fa Man Ze Jue Dharma Assembly, many of you have asked me what the most excellent and great holy Wang Zha Shang Zun is like. In addition to successfully conducting this amazing and very high level ceremony to determine who was and who was not an authentic incarnation of a Buddha, he is a most impressive and powerful elder man who is worthy of our respect. I have met many dharma kings of different sects, but no one is like Wang Zha Shang Zun. His power and virtue surpass all of them.

After the ceremony, I had the extreme good fortune to meet an attendant of his who speaks English and requested to prostrate to the Shang Zun, which to my surprise, was granted. It is very difficult to meet him. The Assistant told me that, to date, probably less than 100 persons in the U.S. have had the good fortune to meet him privately. The attendant took me to the place where this great mahasattva was staying. I was very excited to be able to see him again. Wang Zha Shang Zun mostly speaks Tibetan, but I am told he can also speak Mandarin Chinese. His voice was as I had remembered from the ceremony. Seeing him up close, I realize that he is probably over six feet tall and in excellent health. I had guessed that he must be at least sixty as I knew he had spent 45 years in seclusion in Tibet, but from his appearance guessed he could be even younger.  His attendant told me that Shang Zun had already turned 93. He is very spirited and looked like and had the energy and bearing of a much younger man. As for his appearance, he has a most remarkable full beard, large kind eyes, bushy eyebrows, a rectangular face, and is bald. I was reminded of images of Bodhidharma, the “barbarian” with such a beard and eyebrows who went to China from India, only Wang Zha Shang Zun is considerably more handsome than the great patriarch of Zen is usually portrayed to be. However, what is most impressive is his incredible modesty and humility. This is what it is like to be in the presence of a great holy being!

I had wanted to meet him to express my gratitude for the empowerment I received at the Jin Gang Fa Man Ze Jue Dharma Assembly, but also just to show my respect because I knew that only someone of very high attainment could have performed that dharma. When I offered him prostrations, he would always tell me to prostrate instead to H.H. Dorje Chang Buddha III. His attendant told me that this holder of three gold buttons at a Shang Zun level always carried an image of the Buddha Master with him and did this. When he went back to his living space, the first thing he would do was to put H.H. Dorje Chang Buddha III’s image and Shakyamuni Buddha’s image in a high place and make offerings to them. I again prostrated, but it was just as before. Wang Zha said, “The Buddha Master is here. You should prostrate to the Buddha Master. How can I accept your prostrations?” The other dharma kings I have met always accepted and even arrogantly awaited my prostrations while silently seating on their throne. Wang Zha Shang Zun is certainly the top chief great dharma king among all dharma kings, but he is still so humble. I was very touched. Again I realized how very, very fortunate I am.

Wang Zha Shang Zun is very easy to communicate with and very amiable. Every sentence he says with a smile.  He also provided me with hot tea having his assistant serve me using traditional China teacups. I accepted the teacup and put it aside on the table. Wang Zha then told me that “the quality of this tea is not very good. It comes from Tibet and is called Old Eagle Tea”. However, the fragrance of the tea, was so wonderful that it betrayed his humble portrayal.  I requested from Wang Zha Shang Zun how to practice the Green Tara Mirror Altar Dharma (Jing Tan Fa). The Shang Zun said, “First you have to have a good mirror. Then you get the dharma transmitted through holy inner tantric initiation. The most important thing is that you should practice according to the Buddha Master’s teachings, and let all people know that they should do good and cease evil. It is then very easy to succeed with this dharma. But you should decide by yourself if you want to practice this dharma. The Buddha Master proposed that we should cultivate ourselves and opposed the miraculous. I am not telling you to practice this Green Tara Altar Dharma.”

The time flew by so quickly. My mouth was dry and I realized I needed to drink the tea, but when I lifted the cup, the cup is so heavy it is as if it were glued to the table.  I couldn’t move it even when I exerted a lot of force. I was so surprised. I put that cup on the table. How can I now not lift it? This time Wang Zha Shang Zun saw what was happening and told me, “It is no use to use force. Force cannot lift it. You have to use your mind to lift it. When your mind is not attached to anything, everything will follow your mind.” Then Wang Zha Shang Zun asked me to lift it again. Very strange. It was as if it was weightless. I easily lifted it and also when I opened the cover of the cup, there is a moving image like a video in the cover. I clearly saw a picture of one of my fellow brothers from the past and a moment when I was in Japan. It was very clear, but it quickly started to disappear. I was really surprised. I used my eyes to follow the cover. After a while it completely disappeared. Then Shang Zun said. “Any object can be used as a mirror.” So I suddenly understood why my mind and my cultivation are so important and cannot be replaced by anything else.

I pray that each of you take advantage of this most fortunate fact that the H.H. Dorje Chang Buddha is living in this world now and practice the Dharma that you learn. I also pray that you all quickly become accomplished.

A very ashamed and fortunate disciple, Zhaxi Zhuoma prostrates and offers special thanks to Wang Zha Shang Zun for teaching her this important lesson. 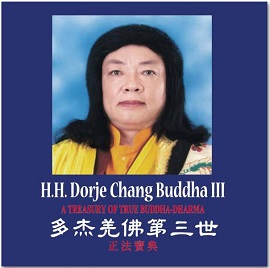